Is a Celtic Cross a scientific instrument as well as a sacred symbol? 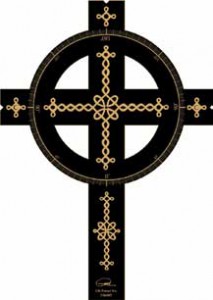 It allows the navigation of the planet without a time piece, the discovery of Natures mathematics and the construction of ancient sacred buildings using astrology. The philosophy behind all the great religions rest within what the cross reveals. The ancient scientific and spiritual wisdom that has shaped our past and still influences our future is part of a forgotten and often hidden system that reaches back beyond the current established religions, further than Ancient Egypt into an age where Mankind lived in harmony with Nature.
Resurrected by Crichton E M Miller in 1997 the ancient working cross has been awarded two Patents.