Many skeptics feel that the crystal skulls are probably of a much more recent vintage than their accompanying stories suggest. This, they believe, is the best way to explain their existence, since no one could have created them without technologies available only within the past century.

Skulls are humanity’s foremost symbol of death, and a powerful icon in the visual vocabularies of cultures all over the globe. Thirteen crystal skulls of apparently ancient origin have been found in parts of Mexico, Central America and South America, comprising one of the most fascinating subjects of 20th Century archaeology. 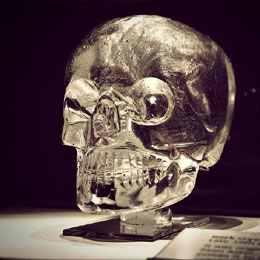 These skulls, found near the ancient ruins of Mayan and Aztec civilizations (with some evidence linking the skulls with past civilization in Peru) are a mystery as profound as the Pyramids of Egypt, the Nazca Lines of Peru, or Stonehenge. Some of the skulls are believed to be between 5,000 and 36,000 years old.

Many indigenous people speak of their remarkable magical and healing properties, but nobody really knows where they came from or what they were used for.

Were they left behind after the destruction of a previous world, such as Atlantis? Are they simply ingenious modern fakes or can they really enable us to see deeply into the past and predict the future?

Much research is currently being done on the skulls. However, their origin is still a baffling mystery. They seem to defy logic. Everything that is known about lapidary work indicates that the skulls should have been shattered fractured, or fallen apart when carved.