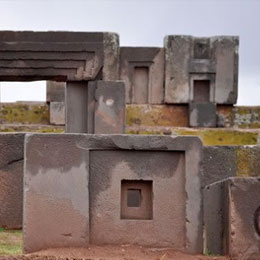 Many popular authors suggest possibility that mysterious sites around the world were created with help of advanced knowledge and technology (possibly more advanced than our current one) possessed by lost civilizations. Others do not believe that there ever was very advanced civilization on earth and all of the superb knowledge was handed down to us by ancient astronauts who came down from heaven. Most scientists do not subscribe to any of these ideas and try to explain ancient enigmas on the ground of  religion and ritual…

In this section we are presenting few sites that are still causing controversy in the scientific community.

Another puzzle is mysterious alignment of world’s ancient sites. Easter Island is exactly aligned along a straight line around the center of the Earth, with the Nazca lines, Ollantaytambo and the Great Pyramid of Egypt. Other world wonders that are within one tenth of one degree of this alignment include: Perseopolis, the capital city of ancient Persia; Mohenjo Daro, the ancient capital city of the Indus Valley; the Oracle of Zeus-Amon at Siwa; and the lost city of Petra. The Ancient Sumarian city of Ur and Angkor temples in Cambodia and Thailand are within one degree of latitude of this alignment.

A Link between Egypt and Americas?

According to the official view there was no contact between the Old World and the New World before Columbus. Yet numerous similarities have been found that suggest a link between Egypt and the Americas:

A Link between Mesopotamia and Americas?

Some researchers reject the dogmatic idea that the New World was isolated prior to 1492. There is some compelling evidence that the ancient peoples from Mesopotamia may have crossed the Atlantic ages before Columbus. The images below represent very much the same religious symbolism. Also, please notice the object held by the deity (it looks the same). Mythic Olmec figure with Jaguar mask on Quetzalcoatle, sculpture from the ancient Olmec site of La Venta (Mexico). Olmecs are considered to be the oldest Meso American Culture.
External link:  The Olmecs Cylinder seal with the solar disk of Ashur, anointing with two eagle-headed gods before the Tree of Life.

Holding a cone or sponge in his right hand and a bucket in his left, this genie is performing a ritual involving the Assyrian sacred tree.  The sacred tree was an extremely important symbol in the palace of Ashurnasirpal, appearing on reliefs in virtually every room of the palace. It was also used in textile patterns, on stamp and cylinder seals, and in ivory carvings. It represented both the king and Ashur, the chief god of Assyria, and was also a symbol of the fertility of the land. Alabaster relief from Nimroud, in the Louvre. Drawing, offering by the god, by Saint-Elme Gautier. In Egyptian mythology Horus, the son of Osiris, is shown as a hawk and a winged solar disk. Book 2 – “SURPRISE WITNESS”  shows what happened DURING that great Deluge – the cosmic calamity that ripped the Earth to shreds and wiped out the original Mother Civilization. Not only were the antedeluvian people buried, but their technological achievements were destroyed, including all form of machinery and construction. The skeptic may shout himself hoarse. But this event surely happened. We have evidence that is more substantial than for any other event of history.

The Destruction of Atlantis:  Compelling Evidence of the Sudden Fall of the Legendary Civilization by Frank Joseph

The Cosmic Code by Zecharia Sitchin

From Atlantis to the Sphinx by Colin Wilson