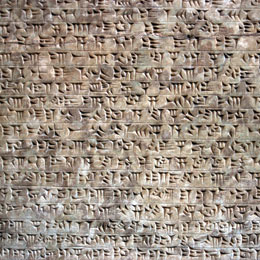 All ancient books which have once been called sacred by man, will have their lasting place in the history of mankind, and those who possess the courage, the perseverance, and the self-denial of the true miner, and of the true scholar, will find even in the darkest and dustiest shafts what they are seeking for, — real nuggets of thought, and precious jewels of faith and hope.

It is important to learn what other people have learned, but too many people have lived and died for me to learn more than a small fraction of what they have learned. There is a prodigious supply of information, facts, opinions, theories, suppositions, and doctrines, but the wisdom needed to sort through the mountain of trash in the hope of finding a gold nugget is not supplied.

The wisdom of our ancestors frequently puzzles modern people. In fact, an average person is totally unaware of that wisdom and many of today’s thinkers who study ancient writings do not understand their true meaning.

Translation:
When heaven above was not yet named, nor earth below pronounced by name,
Apsu, the first one, their begetter and maker Tiamat, who bore them all,
had mixed their waters together, but had not formed pastures, nor discovered
reed-beds. When yet no gods were manifest, nor names pronounced,
nor destinies decreed, then gods were born within them.

The ancient texts are usually interpreted in two ways:

This approach views the ancient writings as a source of religious methodology of spiritual self-perfection and knowledge about God, Life and Death, Evolution, and the meaning of life.
Where does God live, where can one find Him? The overwhelming majority of people involved in primitive forms of religion would answer this question by pointing up to the sky.

Just like they raise eyes and hands when praying. Where does the belief that God is above originate from? Maybe the reason is that on the Earth’s surface one sees suffering and temptations and in the sky — tranquil clouds, endless expanse, caress of the Sun, mystery of the Moon and distant stars?

But Jesus laughed at such speculations:

“If your leaders say to you: ‘Look, the (Father’s) Kingdom is in the sky!’ then the birds of the sky will precede you. … Rather, the Kingdom is within you and it is outside you.”
(The Gospel of Thomas, 3)

“(And) those who seek should not stop seeking until they find. When they find, they will be disturbed, … they will marvel, and (having established in the Kingdom) will reign over all”
(The Gospel of Thomas, 2). This approach treats ancient texts as a source of information about historical events – the Bible becomes a history book… Is there any truth about history of the mankind and our planet in ancient writings,  or is it all religious fantasy and fairy- tales? Can we penetrate the ancient wisdom hidden in the writings of our ancestors?

High Technology in the Bible?

There are readers out there who would be surprised or offended with the notion that high-technology was described in the Bible. There are other readers who have realized that the only explanations to Biblical mysteries are ancient Close Encounters. A good question is: Why are certain, Old Testament events written about in the Bible? The answer could be that these were special events between basically two groups of people: One group was the primitives or the general state of humanity in Biblical times. The other group was the relatively few HUMANS that still retained and utilized technology originating from the days of Atlantis. Read the whole article on this subject:
HIGH-TECHNOLOGY IN THE BIBLE.

Spaceflight in the Mahabharata?

[…] After the Lokopalas had gone away, Arjuna — that slayer of all foes — began to think, O monarch, of the car of Indra! And as Gudakeca gifted with great intelligence was thinking of it, the car endued with great effulgence and guided by Matali, came dividing the clouds and illuminating the firmament and filling the entire welkin with its rattle deep as the roar of mighty masses of clouds. Swords, and miscrias of terrible forms, and maces of frightful description, and winged darts of celestial splendor, and lightnings of the brightest effulgence, and thunderbolts, and Tutagudas furnished with wheels and worked with atmospheric expansion and producing sounds, loud as the roar of great masses of clouds, were on that car. And there were also on that car fierce and huge-bodies Nagas with fiery mouths, and heaps of stones white as the fleecy clouds. And the car was drawn by ten thousand horses of golden hue, endued with the speed of the wind. And furnished with prowess of illusion, the car was drawn with such speed that the eye could hardly mark its progress. And Arjuna saw on that car the flag-staff called Vaijayanta, of blazing effulgence, resembling in hue the emerald or the dark blue lotus, and decked with golden ornaments, and straight as the bamboo. And beholding a charioteer decked in gold seated on that car, the mighty-armed son of Pritha regarded it as belonging to the celestials. […] Matali the charioteer of Cakra, hearing these words of Arjuna, soon mounted the car and controlled the horses. […] Arjuna, blazing like the sun itself, ascended the celestial car. And the Kuru prince, gifted with great intelligence, with a glad heart, coursed through the firmament on that celestial car effulgent as the sun and of extraordinary achievements. And after he had become invisible to the mortals of the earth, he behold thousands of cars of extraordinary beauty. And in that region there was no sun or moon or fire to give light, but it blazed in light of its own, generated by virtue and ascetic merit. And those brilliant regions that are seen from the earth in form of stars, like lamps (in the sky) — so small in consequence of their distance, though very large — were beheld by the son of Pandu, stationed in their respective places, full of beauty and effulgence and blazing with splendor all their own. […] ‘These, O son of Pritha, are virtous persons, stationed in their respective places. It is these whom thou hast seen, O exalted one, as stars from the earth!’

The Mahabharata and Ramayana are the national epics of India. They are probably the longest poems in any language. The Mahabharata, attributed to the sage Vyasa, was written down from 540 to 300 B.C. It tells the legends of the Bharatas, one of the Aryan tribal groups. The Mahabharata was written down a long time ago, before the technology which is described in some parts of it, was (re)invented in our time. Even at the time of the complete literal and close English translation, in the years 1886-1890 (by Kisari Mohan Ganguli, published by Pratap Chandra Roy), no aircraft ever flew and the first combustion engine was just invented a few month earlier.

Get your own copy of this fascinating book: Mahabharata of Krishna-Dwaipayana Vyasa (4 Volume Set)
by KISARI MOHAN GANGULY (This is still the only complete translation of the Mahabharata.)